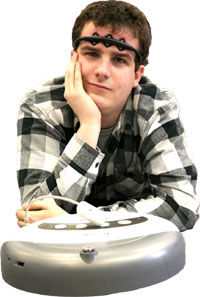 I am a Master of Science graduate from the University of Calgary and studied in the areas of robotics and human-computer interaction.

I was part of the uTouch and GroupLab groups of the Interactions Lab. I was co-supervised by Dr. Ehud Sharlin and Dr. Saul Greenberg.

During my 2-year Master program, I worked on two similar but slightly different projects related to robots. The first was Robot Emotional Control, where I explored how human emotion might be used to control robot behaviour.

The concept of controlling a robot using emotions instead of traditional controls emerged from discussions with my supervisor, Dr. Ehud Sharlin, and my course professor, Dr. Saul Greenberg. We decided to explore the development of a robot that would react accordingly to the way a human feels instead of having to be told what to do. Our idea, which started as a course project, grew into a conference poster presentation, and news media around the world began to notice.

Why is it so new? One main reason. Traditional robots and most computer systems rely on the use buttons, joysticks and other controls to operate. Our prototype works with these too, but it also can be controlled using a headband that reads muscle tension in bioelectrical signals produced directly by the brain. This muscle tension is used to approximate the human emotions of relaxation and stress, so that the robot knows to tune in when the user may want some alone time, move away and look busy.

From there, I moved into designing methods of nonverbal robotic interruption usable to attract the attention of people in specific ways without using speech. This work formed the basis of my MSc Thesis.

My robot project attracted a lot of press coverage at home and around the world.

Saulnier, P., Sharlin, E. and Greenberg, S. (2009)
Using brain-robot interfaces for controlling implicit social patterns. In Workshop on Brain Machine Interfaces for Neuroprostheses and Robot Control, held at the IEEE International Conference on Robotics and Automation. (Kobe, Japan), 3 pages plus poster, May 12. A version of the similar HRI poster/paper above by the same authors.